I am less than a month from publishing Seeds of Gaia and I have a new cover I like better than the last concept.  Tell me what you think. 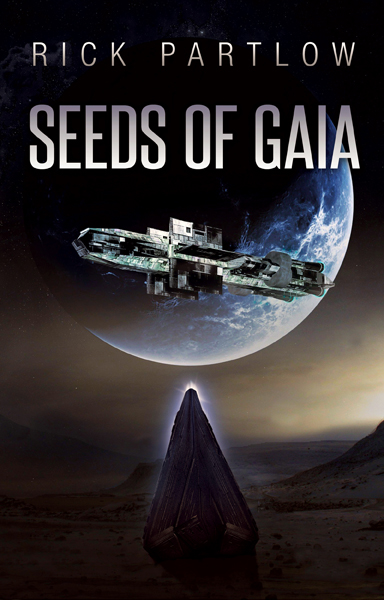 Also, my military SF novel Glory Boy is currently on special for 99 cents for a limited time, for anyone who might not have read it yet.

A note on my plans following Seeds of Gaia.

I’m sort of at a crossroads here, and where I go will depend on the response to Seeds of Gaia.  At this point, it’s a one-off stand-alone, but the universe it builds is pretty interesting and rife with possibilities so there may be more books in that world and with those characters depending on how well it does.

I have been writing basically a book every two months for two years now and I don’t know if I can keep up that pace forever without going nuts, so things may slow down after Seeds of Gaia.  Again that depends on how well it does and how much demand there is for a sequel.

I have officially started writing my next SF novel…or re-started, given I wrote about 20,000 words of it nearly 20 years ago.

Here’s the first iteration of the cover (it will probably be re-done a few times.) 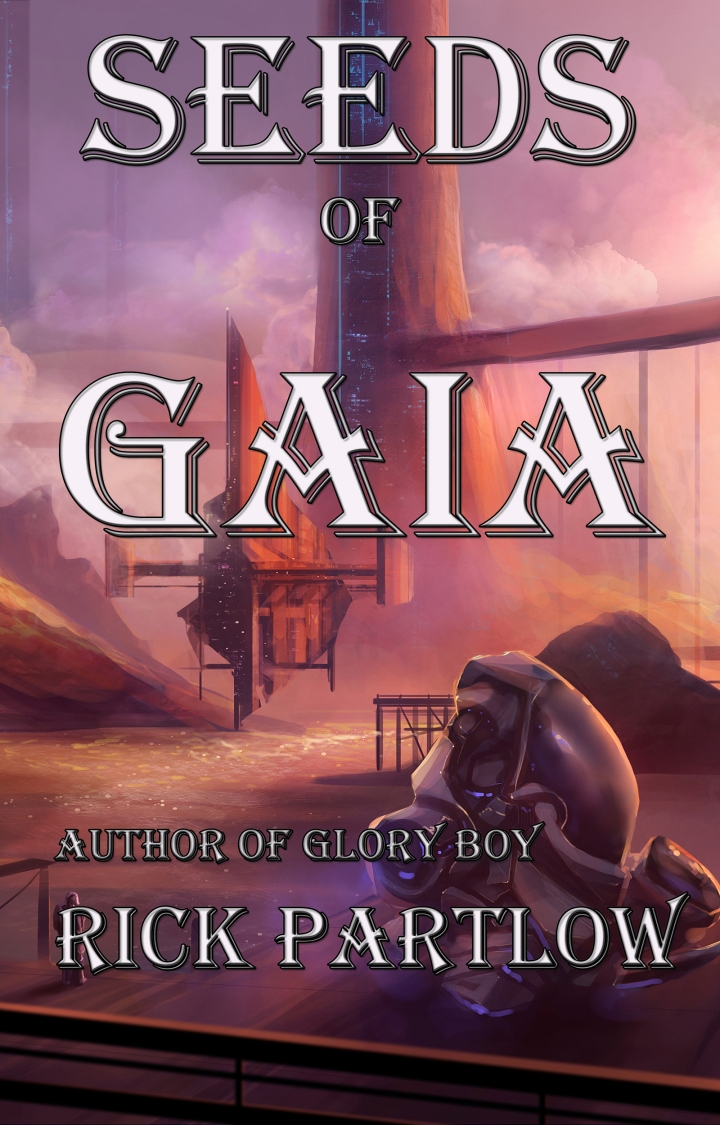 And here is the unedited text of the first chapter:

The fabric of spacetime writhed in birth agony and delivered the sharpened wedge of a starship. Fusion flares lit at the spacecraft’s drive plates, sending it desperately lurching away from the already-closing rift in space and the looming mass of Alpha Centauri A at a punishing five gravities of acceleration. The reason for its haste emerged from the awful nothingness of Transition Space a hundred thousand kilometers closer to the star: a naturalistic, predatory shape bristling with weapons pods and fitted with massively outsized fusion drives.
Deep within the pursuit ship Raven, encased in the gelatinous fluid of an acceleration tank, Captain Samuel Avalon watched his prey through a neural feed from the exterior sensors. With a thought, he called up the intercept course his navigator had already plotted, watching the animated line overlay itself on the sensor image of the fleeing bandit.
Estimated intercept time? He asked, his implanted neurolink relaying the question to the navigator’s g-tank.
One hour at maximum g’s, came the immediate reply.
Execute.
Sam felt his chest squeezed by a giant fist and remembered to whisper a prayer of thanks to Gaia for the blessings of oxygenated biotic fluid. Without the g-tanks, twenty gravities’ acceleration would have ruptured his organs and left him choking in his own blood.
Bandits increasing acceleration to eight g’s, his weapons’ officer announced. They really don’t want to talk to us Sam.
Devon, Sam called to the navigator, can we still get them before they reach the antipodal Transition point?
Not at this rate Sam, the woman replied. He could almost see her shaking her head. Our only chance is if they don’t have g-tanks. They won’t be able to keep up this sort of acceleration long without em.
We can’t chance that, he decided. They’ve already killed three freighter crews…we can’t let them do it again. Arvid, he addressed the weapon’s officer, take out his drives. Make it clean as you can.
Launching.
The Patrol cutter shuddered as the flattened dart of a missile detached itself from the outer hull, maneuvering jets kicking it away from the cutter before its drives lit in a flash of annihilated antihydrogen. The missile streaked away from the cutter as if the ship were standing still, accelerating towards the fleeing bandit at over a hundred gravities.
Throttle us down to one g and let’s get out of these tanks, Sam declared. The missile would stop the bandits or it wouldn’t—there was no point in wasting fuel to be there a few hours sooner.
He felt the pressure ease from his chest and almost immediately the fluid began draining from the g-tank. Taking a breath of air for the first time in over an hour, he gagged, choking out the remains of the oxygenated fluid from his lungs before it had a chance to evaporate. The last of the fluid drained from the tank and then the seal broke, letting in a rush of cold air that sent him into involuntary shivers.
The others were stumbling from their cabinets as he made his way out of the g-chamber and into the communal shower. Sprays of warm water erupted from the walls, scrubbing the dried biotic gel from his skin and hair as the rest of the ship’s crew filed in behind him.
“The hunter-killer should arrive on target in less than a half hour, Sam,” Devon told him, leaning back to let the streams of water at her close-cropped hair. She had an athlete’s physique, but after two years of serving with the same crew, Sam hardly glanced at it anymore.
“Do you think we can get a clean hit?” Carlos, the ship’s medical officer asked her as he moved into the shower.
“No way of knowing,” she shook her head. “The bandit ship is a freighter hull, but you know how they chop those things up. They could have a shitload of armor or they could have stripped off most of their shielding to mount weapons and fuel pods.”
“Why worry about those SOB’s?” Arvid muttered. “They knew what the risks were when they decided to work for the Consensus. Damn Earthers are getting what they deserve.”
“We worry about those SOB’s,” Sam fixed the smaller man with a glare, “because they are human beings, just like us.” The others fell into embarrassed silence, not meeting his gaze. “Get dressed and get to the control room.”
Sam turned and walked through the warm air of the dryers, trying not to look back at them. He knew he was hard on Arvid, but they couldn’t let themselves become like the Earthers, couldn’t allow themselves to have such disrespect for life. If that happened, there would be nothing left worth fighting for.

Less than ten minutes later, the entire crew was strapped into acceleration couches in the ship’s main control room and Sam Avalon was staring at the tactical holodisplay, watching the blue arrow that represented his missile closing on the red dot of the bandit ship.
“He isn’t increasing his boost,” Devon commented.
“They must not be equipped with g-tanks,” Carlos said. “I’d be surprised if any of them were still conscious.”
“The missile has hit burnout,” Arvid announced. “Still gonna take them before they hit the Transition point.”
Sam thought, not for the first time, how pressing and instinctive the human need for conversation was. Each of them had a computer link and transmitter implanted at the base of their skull and could wordlessly access tactical displays, technical readouts and situational updates from the computer or from each other, yet each of them still felt the need to make such periodic announcements. He didn’t bother trying to prevent it—he might as well have asked them not to breathe.
“We all clear of civvie traffic?” Carlos asked.
“I ran a general area scan when we jumped in,” Devon replied. “Nothing then, let me…”
There was a discontinuity.
For a moment, none of them were aware anything had happened—it was as if they had blinked in unison. Then Sam noticed that the red dot representing the bandit had disappeared from the tactical holotank.
“What the hell?” He blurted, leaning forward against his acceleration restraints. “Where are they Devon? Did they jump?”
“No, they’re just gone,” Devon shook her head. “Our missile too…not a shred of wreckage. What in Gaia’s name?” She looked over at him, frowning in perplexity. “We were just hit with a massive EMP, Sam—all of our sensors were out for almost a second.”
“An Electromagnetic Pulse?” He repeated. “From what?”
“I don’t know, even the cameras blanked out.”
“I can try to get a feed from the Resolution habitats in the Centauri Belt,” Arvid suggested, making the connection without waiting for permission.
The Raven’s AI negotiated with those of the collection of asteroid habitats and within seconds, each of the crew was watching a video feed from an optical telescope located near the inner edge of the belt. Frame by frame the images downloaded into their individual neurolinks, beginning with view of the fleeing bandit craft, its fusion drive glowing like a miniature star. With the next frame, the dart of the intercept missile came into view, a computer-generated outline allowing them to see it against the black background.
The missile drew closer to the bandit ship, and when it was only a thousand kilometers away, something superimposed itself on the blackness, something huge and gray and formless that wiped out everything else in the frame. And then there was nothing.
Raven, Sam ordered the ship’s computer, enhance that image…get me an ID.
Working on it, Sam, the AI promised. There was a long pause, and when the computer spoke to him again, it was with a hesitancy that Sam had never heard before. Sam, I recommend we make for Aphrodite at maximum emergency speed.
“Hey Sam, what gives?” Arvid asked plaintively. “Raven just shut me out of the net.”
“Me too,” Devon confirmed, frowning.
Tell me Raven, Sam ordered.
Let me show you, Sam.
He found himself floating in the darkness, watching the frozen image of the bandit starship, the replay slowed down an order of magnitude below normal speed. It still only occupied the image for a moment, less than a heartbeat, but there was no doubt as to what it was. Basically cylindrical in shape, its fore-end was a gigantic funnel a dozen times the size of the main body, while the aft was a cauldron of fusion fire, an engine so powerful it was contained only with magnetic fields.
Its course passed hundreds of thousands of kilometers beyond the bandit ship, but the unsuspecting starship disintegrated in its wake, torn apart at the molecular level by an electromagnetic field so powerful that it could collect interstellar hydrogen for use as fuel. The intercept missile, another two hundred thousand klicks distant, spontaneously detonated, its explosion lost in the passage of the…the alien. Sam had to force himself to use the word.
But there was no other word to use. No human had built that ship, he was sure. And so, after nearly a thousand years in space, after a century of routine star travel via the Transition Lines, he, Captain Samuel Abanks-Avalon, was the first human to encounter an alien intelligence.
No, not the first…the bandits were the first. Unfortunately for them.
Where is it going? He asked the Raven’s computer.
At its present trajectory, it will skim the outer atmosphere of Alpha Centauri A, Raven told him. Presumably to pick up extra fuel. After that…it is on a direct collision course with the Earth, at over ninety percent of lightspeed.
Sam’s chest tightened as the AI’s words sunk in.
That thing has to be the size of a small planet, he said slowly. If it hits at that velocity…
If it is not stopped, the computer told him, in five years there will be nothing left of Earth but a cloud of rubble.
“Devon,” Sam fairly snarled the words, noticing the shocked expressions on the faces of the others but not caring, “get us to the Transition Point. Fastest circuit back to Aphrodite. Get us home now.”